PAge Made by: kelsey lamothe

Reorganization of stresses at the 110mm/year obliquely convergent boundary between the Australian plate and the Pacific plate is proposed to have caused the formation of the South Bismarck plate, Woodlark plate, and Solomon Sea plate (Tregoning et al., 1998; Webb et al., 2008). The Solomon Sea plate is subducting beneath plates both to the north and south- the South Bismarck plate and Woodlark plate respectively- and if current-day plate motions continue, it will likely eventually be entirely consumed. The Molucca Sea plate, if considered to be made of three different microplates, is another plate which is in danger of being completely consumed due to subduction beneath other plates on multiple sides. Some believe it has already been completely subducted beneath the proposed Sangihe and Halmahera microplates, to the west and east respectively (Silver and Moore, 1978). 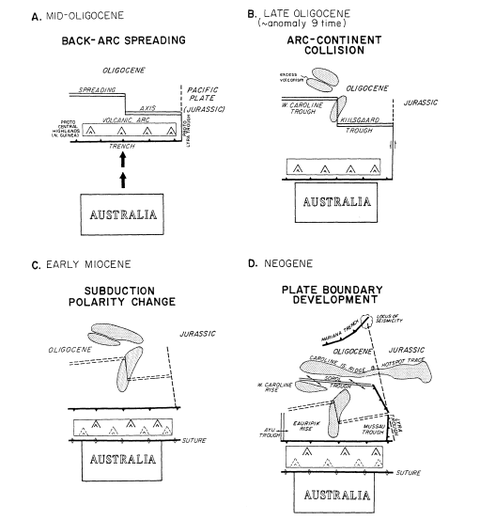 Figure 1. The evolution of the Caroline plate region, from Hegarty and Weissel (1988).

The Caroline plate is thought to have formed during the early Oligocene as a result of back-arc spreading from the subduction of the Indo-Australian plate beneath New Guinea, and originally consisted of a northern and a southern platelet separated by the spreading ridge that was forming them. The spreading lasted until the late Oligocene, and was stopped by the collision of the Australian plate with New Guinea island arc material (Hegarty and Weissel, 1988). Around the time that the spreading stopped, the Eauripik Rise formed from what is proposed to be a melting anomaly along a step-over transform boundary between two spreading ridges. This Rise divided the Caroline plate into East and West Basins (Hegarty and Weissel, 1988). Assuming current-day plate motions continue, the Caroline plate move in a WNW direction and possibly begin to slowly subduct beneath the Philippine Sea plate into the Yap and Palau Trenches (Hegarty and Weissel, 1988).
Before 15 My ago, North and South Bismarck plates were a single Bismarck plate, underneath which the Pacific plate was subducting, creating the Manus Trench and causing calc-alkaline volcanism on the Bismarck plate during the  Oligocene and Miocene (Franz et al., 2002). At approximately 15 My ago, a collision with the Ontong-Java Plateau on the Pacific plate blocked up the Manus trench and forced the redistribution of stresses and plate rotation, leading to a subduction reversal. The Solomon Sea plate began to subduct northwards beneath the Bismarck plate, leading to back-arc spreading in the Manus basin which separated Bismarck into the two plates we see today – North Bismarck and South Bismarck, moving left-lateral with respect to each other (Franz et al., 2002). This also led to the formation of the Manus plate, which is explained in more detail on the Caroline, North Bismarck, South Bismarck, and Manus plates page.  If current plate motions continue, the Manus microplate could grow larger as spreading continues in the back-arc basin.

Hegarty, K. A. and J. K. Weissel, 1988. Complexities in the development of the Caroline plate region, Western Equatorial Pacific in The Ocean Basin and Margins, New York, Springer, pp. 277-301.